PCO & Fertility issues were adapted as theme for the year and conducted CME programs based on the theme at Kozhikode, Thrissur, Kasargod, Kannur and Kollam. This was organized as programs of IFS Special Interest Group(SIG) on PCOS. Each CME were attended by 100-120 delegates.

Adolescent health awareness programs were conducted for plus two girls and professional college students as a part of IFS –PCO SIG activity in 23 institutions. Each session was attended by more than 500 students and classes were taken by IFS members and Nursing college teachers.


CME on “Dilemmas in Infertility” organized by Dr Surveen Ghumman under aegis of IFS and AOGD infertility committee on 26th August at Hotel Vikram. It was attended by 70 delegates. Lectures on Gonadotropins, Monitoring of IUI cycle, semenalysis and fibroids in infertility were given by Dr Manju Puri Dr Surveen Ghumman Dr Pankaj Talwar and Dr Kuldeep jain 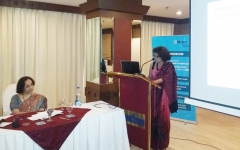 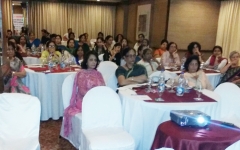 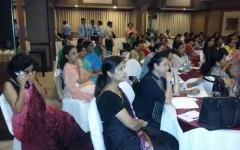 
The team IFS Kerala Chapter is very grateful to the national Office bearers of IFS especially Dr Sonia Malik, Dr Gaouri Devi, Dr Sudha Prasad and Dr Pankaj Talwar who have whole heartedly supported us in establishing this state chapter and to kick start the academic activities in Reproductive medicine in our state in an impartial way.

Dr Sonia Malik, the national president of IFS, inaugurated the Kerala state chapter of the Indian Fertility Society on 18th September at Kochi. The function was held at Hotel Corwne Plaza, Kochi.

Dr Sonia Malik inaugurated the function by lighting the lamp. Dr Venugopal, the Joint secretary of the state chapter welcomed the gathering. Dr K.U.Kunjimoideen, the Secretary of the chapter talked about the need of the state chapter and its importance. He has declared the list of executive members and treasurer ho were nominated from among the life members. Dr Sonia Malik, the national president described about the aims and objectives of the IFS during the inaugural speech and also the future plans of IFS. Dr Gouri Devi, the national Vice President and Dr Pankaj Talwar made the felicitation speech. Dr parasuram Gopinath expressed the vote of thanks.

The inauguration was followed by a Panel discussion on ‘How to improve the results in ART?’. Dr Sonia Malik and Dr Gouri Devi moderated the discussion. Dr Mridubashini(Coimbatore), Dr Mohan Kamath(CMC Vellore), Dr . K.K.Gopinathan(Kerala), Dr Mohammed Ashraf(Kerala), Dr Sathi M Pillai (Kerala) and Dr Sujatha Ramkrishnan (Chennai) were the panel members. The session was followed by an excellent audience interaction.

3. Membership campaign: The chapter has initiated a membership campaign for the specialists practicing reproductive medicine in the state of Kerala. 10 new members have joint apart from the 20 founder members. The campaign will be a yearlong campaign, which is integrated with the district level half-day CME programs


BASICS AND BEYOND IN FOETAL MEDICINE

Summary: The program was organized by the Kerala Chapter of IFS, in association with ARMC IVf Fertility centers. 300 delegates from various places of South India have attended the program. The meeting was inaugurated by Prof.Mohanan, Prof of Radiology and Principal Govt Medical College Thrissur. Prof KD Nayar, national Secretary of IFS was Guest f honour. Prof KD Nayar Spoke on ‘Gestational Diabetes- The impact on Foetus’. Dr Boopath V(coimbatore), Dr Chander Lulla (Mumbai), Dr BS Rama Murthy (Bangalore) and Dr Indrani Suresh(Chennai) were other faculties. Dr Kunjimoideen, the chapter secretary presided over the function and DR Venugopal, The joint secretary of the chapter welcomed the gathering.